More than twenty years after its premiere, The Big Lebowski has not only transcended for its black humor and hilarious situations. Also, because of this film Jeff Bridges, the actor who played the Dude, has dedicated himself to teaching the world to avoid anxiety and seek a Zen lifestyle.

It was in 1998. That year, The Big Lebowski, the Coen brothers’ film about the life of a beloved (ex) unemployed hippie – the Dude – was released, who ends up in a series of strange situations in Los Angeles, California.

And all from the moment someone enters your house and urinates on your carpet. 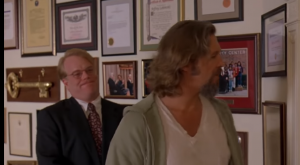 Today, more than two decades after its release, it is clear that The Big Lebowski is more than a cult film; By now, in fact, it’s already a whole cult. Here’s the proof: the Lebowski Festival, which has been running since 2002, goes from city to city within the United States (it also has a version in England), gathering hundreds of fans who dress up, play bowling and sing the songs of the soundtrack, like “Hotel California” by the Gipsy Kings, or that hedonistic anthem by Bob Dylan: “The man in me.”

And books. All those books. From cultural studies, bowling guides, and even philosophical, religious, and many books on Dudeism, that religion created from the Coen film.

However, there is another current that has emerged from The Big Lebowski.

This because many and many see the Dude as someone who can put up with a lot (starting, of course, that someone urinates his favorite carpet) and who still takes everything in stride.

Actor Jeff Bridges and Bernie Glassman, one of the first to bring Buddhist teachings to America, have long talked about that. Both are authors of The Dude and the Zen Master (2013), a book of conversations in which they explain the Dude as the most relaxed being on the face of this earth.